Skip to main content
Home Host a Show Calendar Store Contact About
Home / News / Do You Notice the Difference?

Bringing continuity to the Tolton film.

Have you ever played the game where you’re given two pictures that, at first glance, look the same, but then you have to find the differences between them? That’s kind of like what we’re doing with the Tolton editing project right now!

Imagine you’re the editor for this film. You’d have to be on the lookout for subtle changes.

Here you have pictures from two different takes (which means we filmed the scene twice – each time was a “take” of the same scene). Maybe you noticed that Jim, the actor, has his hands together in Take 1 but his hands are apart in Take 2.

Cutting from Take 1 to the new camera angle pictured here would be distracting and look wrong: hands together, to hands immediately apart. But if you match Take 2 with this camera angle, your audience will barely notice the cut, because Jim’s hands are in the exact same position.

Way to go! You just created continuity in the film – one of the most important tasks of an editor. Would you continue to pray for our real editor and director?

And please – send what you can so we can get the Tolton film to you soon! 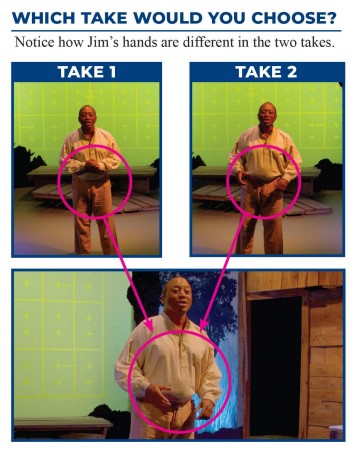